In Japan, there are a variety of different cuisines. One of the most popular is teppanyaki, which is a style of cooking that uses an iron griddle on top of an electric stove to cook ingredients. This style of cooking has been around since the 1800s. Nowadays, teppanyaki can be found at various types of restaurants and has become wildly popular around the world. Read on to find out how teppanyaki differs from other Japanese cuisines and why you should try it.

Teppanyaki is a Japanese style of cooking involving the use of an iron griddle or teppan. In fact, the word teppan means “iron plate” and yaki means “to grill.” The grill provides a very quick and even heat distribution while being suited to delicate tasks like lightly frying shrimp tempura. The grill can also be used as a stovetop surface for sauteing ingredients that need less high-heat treatment such as thinly sliced onions.

The Origins Of Teppanyaki

While the origin of teppanyaki has many different stories, the most popular is that of Chef Shigeji Fujioka. In 1945, Japanese Chef Shigeji Fujioka first introduced teppanyaki cooking in his restaurant Misono located in Kobe, Japan. After the war, Fujioka went to the dockyards and collected an iron plate to make okonomiyaki back at the restaurant. When an American officer entered Fujioka’s restaurant, he thought he had picked the wrong restaurant because he noticed there was no beef included in the cooking.

In response to the American soldier, Fujioka tried grilling beef on the iron plate. It was from here that modern-day teppanyaki began its origins.

Fast forward to 1964, teppanyaki was popularized by Hiroaki “Rocky” Aoki, who is recognised as the founder of the Benihana chain of teppanyaki-style restaurants. The company is now worth about $300 million a year, impressively expanding to around 100 locations around the world. Today, teppanyaki is an internationally popular cuisine loved by anyone who tastes this unique Japanese cuisine!

The Ingredients Of Teppanyaki

There are many variations to a teppanyaki dish and almost no two chefs prepare it in the same way. While there may be some variation between each individual chef’s style, there are four typical staples: beef steak; vegetables such as onions or peppers; seafood dishes like shrimp tempura; and a variety of sauces and sidings such as noodles.

The ingredients used in teppanyaki can also depend on the region you are cooking in. Nonetheless, the teppanyaki experience is one that will be unforgettable regardless of where you’re from!

Teppanyaki is unique because it is the only Japanese cuisine where a chef cooks your meal right before you at a table big enough for 10 people, with fresh ingredients and an assortment of sauces that will make every bite flavorful!

The chefs use knives specially made for the teppanyaki art form which are sharp enough to cut ingredients without bruising them or leaving any rough edges. In addition to that, each restaurant has its own unique specialties which can offer you a unique teppanyaki experience depending on which restaurant you visit.

Teppanyaki chefs are also highly skilled and can perform exciting tricks such as making onion volcanoes, cracking eggs by throwing them into the air and landing it on their spatula, or even flipping shrimp tails into your shirt pocket! Teppanyaki is unique because it is not just a cuisine but an entire culinary experience and art form.

Why Should You Try Teppanyaki?

Teppanyaki is often considered a more personal and interactive experience. Unlike traditional Japanese restaurants where you order food from either the sushi bar or teishoku (set menu) section of their venue, Teppanyaki allows you to interact with chefs while they prepare your meal in front of them on an electric grill right at your table!

By trying out teppanyaki with friends and family, you’ll have fun, laugh together, and bond as you eat something delicious! Plus there’s always room at the table for one more person thanks to its communal nature.

Teppanyaki is a definite must-try, so write it down now on your next bucket list!

Teppanyaki is a type of Japanese cuisine that differs from other types because it involves cooking on an iron griddle in front of guests. Teppanyaki is one of the most popular types of cooking in Japan because it’s a fun way to share an experience with friends and family while eating great food! If you have the chance, give it a try! 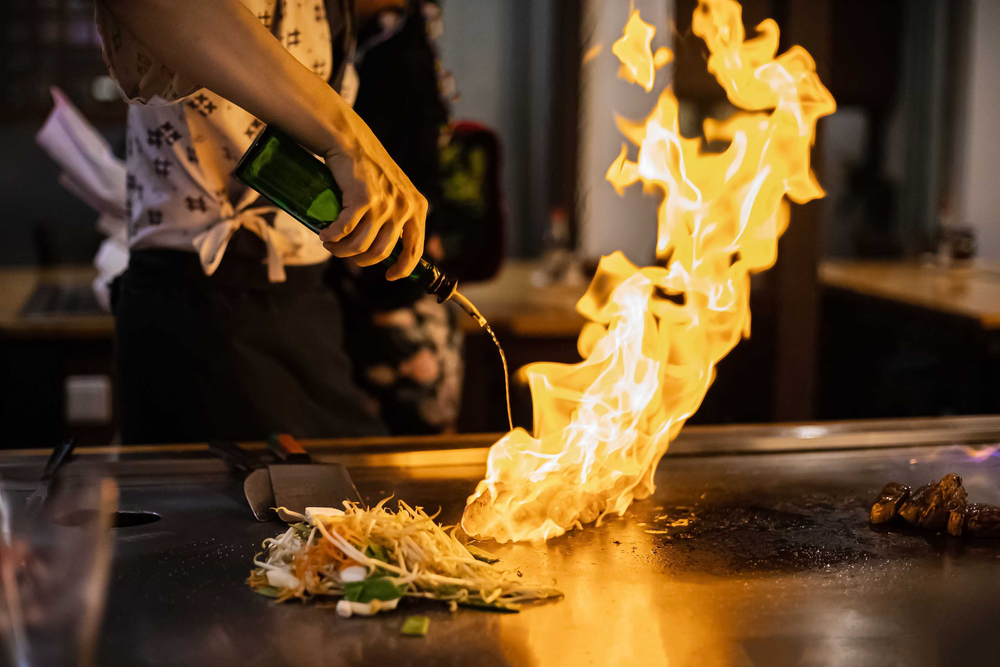