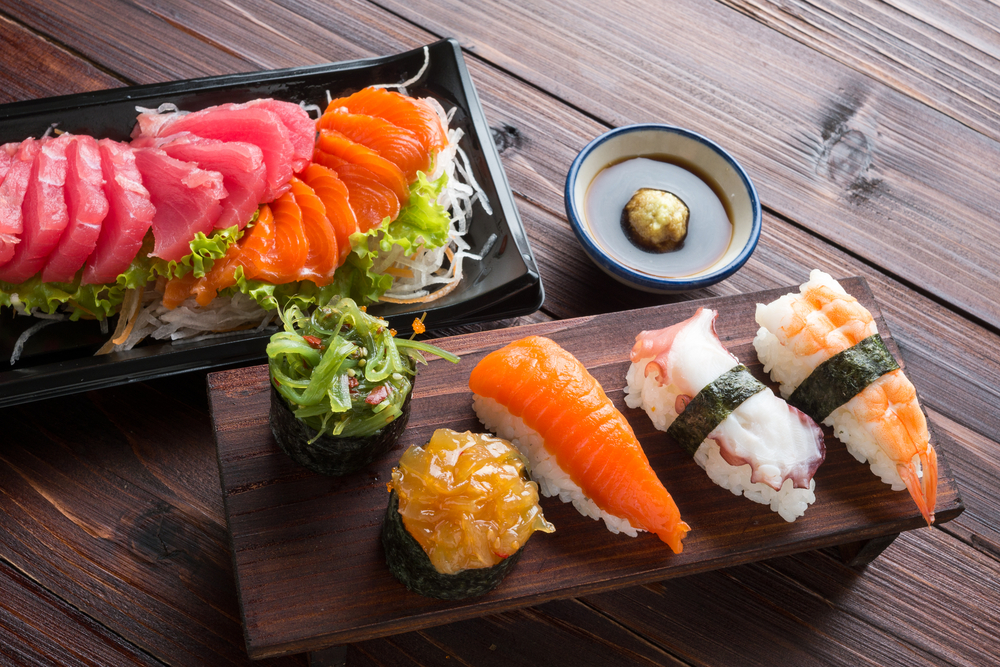 Are you a novice Japanese cuisine enthusiast? Have you ever wondered what the difference between sushi, sashimi, and nigiri is? This article will help to shed some light on their differences by explaining what they are, where they originated, and what their distinctive components are.

What Is The History Behind Sushi?

Sushi is a popular Japanese dish in which oblong-shaped vinegared rice is topped with assorted ingredients. Sushi originated from China in the second century A.D. and arose from the need to preserve food.

Vinegared rice was used to wrap fish and ferment it to keep the fish fresh for a period of time. Once the fish was fermented, the rice would be thrown out and the fish would be eaten. Sushi had made its way through China and eventually arrived in Japan. As a country whose staple food is seafood, sushi became very popular.

It was only until a man named Hanaya Yohei transfigured sushi cuisine as we know it today by placing fresh fish on a sculpted piece of seasoned rice. This renewed version of sushi became popular on the streets and people began putting up sushi stalls. However, after World War II, these sushi stalls closed down and moved to indoors where sanitary settings were better.

Little did they know that this was the beginning of the integration of sushi into authentic dining experiences. Today, sushi has been elevated into an artistic culinary craft that has found its place around the world. Western influences have incorporated unique fusions to diversify sushi and elevate it from its Japanese origins.

What Are The Unique Components Of Sushi?

The most essential ingredient of sushi is vinegar-soaked rice. In fact, sushi comes from a Japanese word that means “sour rice.” Traditional sushi usually contains raw seafood while modern sushi can include various types of meat, vegetables, and cooked seafood along with extra ingredients like cucumbers and avocados. Seaweed is also considered an important component of sushi.

What Is Sashimi And Where did Sashimi Originate?

Sashimi is essentially thinly sliced raw food. Seafood is mostly used but it can also be meat and other types of food. Generally, saltwater fish are preferred over freshwater fish because they have lower risks of parasites. Sashimi is usually served with daikon as a substitute for rice.

There is a lot of speculations and theories as to how sashimi came into existence. Some people argue that it originated during the Heian period from a dish served at the Japanese court. This dish used a vinegar called “namasu” to season sliced raw fish and vegetables. Other people argue that it originated in the Kamakura period when fishermen sold sliced fish as fast food.

What Are The Unique Components Of Sashimi?

The most popular type of sashimi is raw seafood. This may include fish and shellfish such as maguro (tuna), sake (salmon), and uni (sea urchin). Sashimi can also take form in various types of meat such as beef, deer, and horse, along with other types of foods such as tofu. Unlike sushi, sashimi does not contain rice; however, it can also be flavoured with soy sauce and wasabi.

What Is Nigiri And Where Did Nigiri Originate??

Nigiri may be considered a type of sushi because it is raw seafood that is served over sculpted vinegar rice. The origins of nigiri may be attributed to a man named Hanaya Yohei who lived in the Ryogoku district of Edo in the 1820s. He owned his own sushi stall along the banks of the Sumida River to ensure the optimal freshness of fish and to eliminate the need to ferment it.

This now meant that sushi could be served in faster without having to wait for it to ferment over a long period of time. As a result of this, nigiri became popular among crowds of people and evolved to become an important sushi staple.

What Are The Unique Components of Nigiri?

Sushi, sashimi, and nigiri are fundamentally simple dishes; however, they can all be presented and created in a variety of ways. They are representative of the artistic culinary craft of Japanese cuisine that has inspired numerous culinary landscapes and cultures from different walks of life. Today, sushi, sashimi, and nigiri are championed as iconic Japanese dishes that are served around the world.