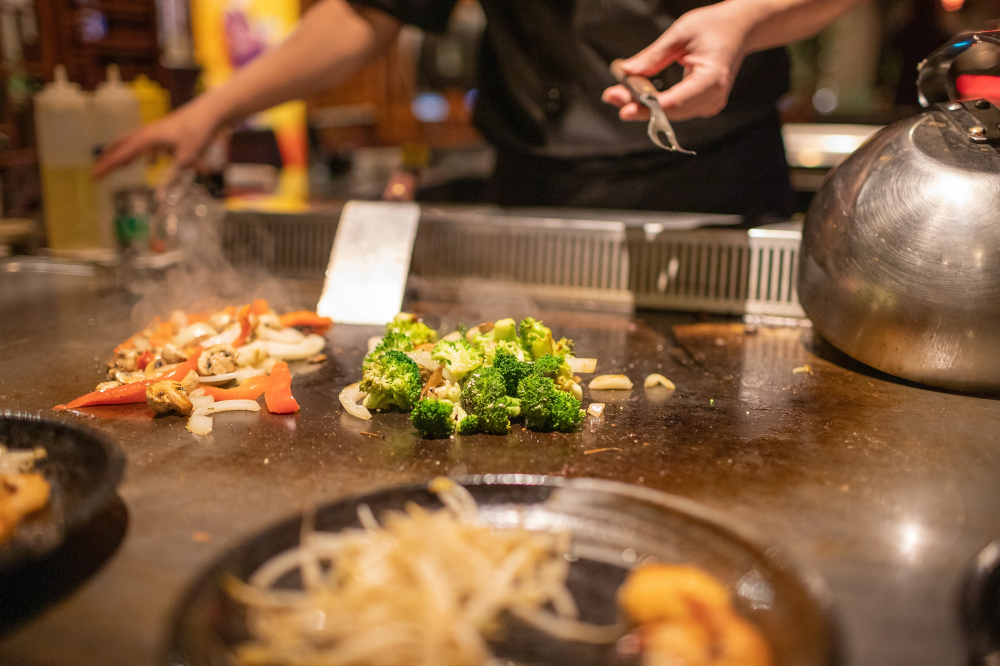 Japanese cuisine is one of the most popular cuisines around the world. A highly popular form of Japanese cuisine is teppanyaki, a style of cooking that involves grilling on an iron plate. In fact, this is reflected in the name, where ‘teppan’ means iron griddle and ‘yaki’ means grill or boil.

However, many people often confuse teppanyaki with another form of Japanese cuisine: teriyaki. They may sound alike, but they are actually quite different from each other. What might these differences be?

First off, let’s discuss what teppanyaki is. Teppanyaki is a Japanese style of cooking that grills food on a flat iron plate known as a teppan. When it comes to ingredients, meats can range from steak, chicken, and seafood. You may also find okonomiyaki and monjayaki (savoury pancakes), dough-based foods like yakisoba (noodles), finely chopped vegetables such as carrots, onions, and bean sprouts, and seasonings such as soy sauce, vinegar, wine, and more.

Japanese-style teppanyaki often makes use of yakisoba, cabbage, and sliced meat or seafood cooked with vegetable oil, animal fat, or both. Most Japanese restaurants make use of Kobe beef, which is known to be quite pricey but very high quality.

The main characteristic of teppanyaki is that it is classified as a culinary performance. Guests are typically seated around a large table with a teppan grill located in the middle. The chef stands by and performs a show by tossing, flipping, drumming, and clanging their tools together.

After this, the chef performs tricks on the food that can range from flipping a shrimp tail into their shirt pocket, throwing an egg in the air and splitting it open with a spatula, and arranging onion rings into a fire-shooting volcano.

Therefore, more than being a culinary art, teppanyaki is also an intimate performance art. Because of this, teppanyaki chefs are specially trained not only to deliver quality food but to elevate the teppanyaki dining experience to a whole new level.

Teriyaki is also another popular form of Japanese cuisine. The word teriyaki is a combination of two words: ‘teri,’ which means luster, and ‘yaki,’ which means grill or boil. Teriyaki is technically a cooking style, but it is more commonly associated with the sauce.

Teriyaki sauce is described as an amber-coloured gloss that adds a salty-sweet flavour to grilled meats and vegetables. It is a sweet and tangy sticky sauce that contains salty umami. Its base is simply comprised of soy sauce and mirin, which is a low-alcohol and sweeter version of sake, known as a traditional Japanese rice wine. Occasionally, you may also find flavours like garlic, ginger, citrus, and sesame in teriyaki sauce.

Teriyaki sauce is commonly used as a marinade for fish (particularly grilled chicken), but it can also be used in an oven or broiler, on a skillet, in a slow cooker, and even in a wok for stir-fry.

The main similarity of teppanyaki and teriyaki simply lies in the name. Both contain the word ‘yaki’ which is roughly translated to grill or boil. This is quite true as both cuisines typically deal with grilled (or boiled) food.

However, they have many differences as well. While teppanyaki is a performative culinary art that refers to the style of cooking food on a flat iron grill, teriyaki often refers to the sauce itself. Interestingly, teriyaki can also be used in teppanyaki cooking even though teriyaki chicken, for example, is more often than not cooked over a flame grill.

Many people might confuse teppanyaki and teriyaki, but they are quite different from each other. They are similar in that they contain the word ‘yaki’ meaning grill or boil. However, teppanyaki is a style of cooking that uses a large metal plate, or a teppan, to grill food. Meanwhile, teriyaki refers to a sauce that is used for foods that are either grilled or broiled.